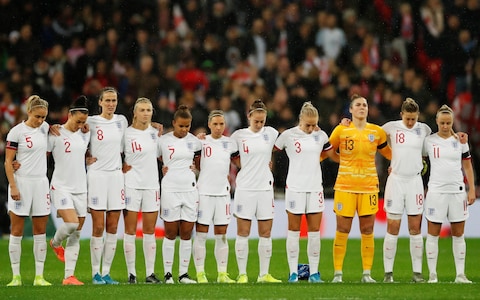 A record crowd of 77,768 for English women’s football saw fresh struggles for Phil Neville’s side in a 2-1 loss to Germany at Wembley Stadium on Saturday, but did any of his players impress?

Mary Earps (Manchester United)
Tested from the off, Earps looked a bit nervy struggling to hold the ball but produced some important saves. Just inches from saving the first Germany goal but the second was fired in too quickly for her. 6/10

Alex Greenwood (Lyon)
Kept very quiet on the left-hand side with little to contribute to the game. Sent her corner kick looping way over the England player’s heads. 5/10

Leah Williamson (Arsenal)
Made some dangerous decisions that almost cost England, running back towards goal away from oncoming German attack and passing back to Earps under pressure. 5/10

Steph Houghton (Manchester City)
Gave too much space when marking the German goalscorers allowing them both to put the ball in the back of the net. Many attempts at longer balls through to the forwards but almost all intercepted. 5/10

Lucy Bronze (Lyon)
Saved the England defence time and time again from their dodgy passes round the back with solid clearances. Exciting runs up the pitch, injecting pace into the game. 8/10

Jill Scott (Manchester City)
Produced a vital block at the 20-minute mark to prevent England from going 2-0 down. Could not get a lot of time on the ball closed down by German midfield. 6/10

Beth Mead (Arsenal)
Won the penalty for England, tripped by Merle Frohms. Produced a lovely dribble and dodge into the box in the first half but not up to her usual level of crosses. 7/10

Jordan Nobbs (Arsenal)
High tempo attacking and defending but not making a major impact on the game. Some good link up play with Arsenal team-mate Mead. 6/10

Nikita Parris (Lyon)
Missed the penalty that could have left England leading at half time. Working hard on left-hand side but not managing to get make anything of through balls. 5/10

Ellen White (Manchester City)
Fantastic one touch goal, bringing out her trademark glasses celebration. Took a while to warm into the game but signs of promise when she did. 7/10