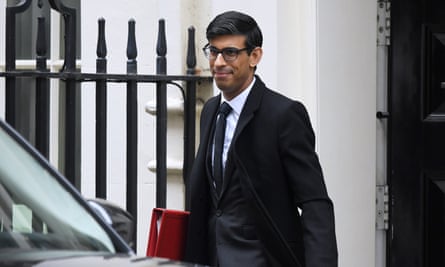 The chancellor will promise “historic” investment in roads, railways, broadband and scientific research in his first budget, as the government tries to deliver on its promise to level up the UK.

Much of Rishi Sunak’s first major statement on Wednesday will be devoted to the emergency measures the Treasury will take to cushion the economic impact of the coronavirus.

But he will also seek to draw a line under a decade of Conservative austerity, by promising to boost spending on infrastructure and innovation. It is understood the funding could be more than £600bn over the five-year parliament – although most of this is money already pledged.

“This is a budget for people right across the country – no region will be left behind,” Sunak said on Tuesday.

“We have listened and will now deliver on our promise to level up the UK, ensuring everyone has the same chances and opportunities in life, wherever they live.

“By investing historic amounts in British innovation and world-class infrastructure, we will rebalance opportunities and lay the foundations for a decade of growth for everybody.”

It is unclear when he expects that “decade of growth” to begin, however: GDP flatlined in the final quarter of 2019, and independent forecasts collated by the Treasury pointed to just 1.1% growth in 2020, even before the Covid-19 outbreak really took hold.

The shadow chancellor, John McDonnell, claimed the tone of the chancellor’s statement showed that Boris Johnson’s spinners had taken control of the budget.

“Rishi Sunak is asking us to congratulate him for telling us he’s only partially rebuilding what the Conservatives have destroyed over the last 10 years. A stronger Treasury would have prevented this overblown hype from No 10,” he said.

Sunak’s predecessor, Sajid Javid, promised to ramp up government borrowing to fund a significant increase in infrastructure spending – before dramatically resigning after a row over No 10’s influence on the Treasury.

The government’s infrastructure strategy – a formal document setting out the plans in detail – is not expected to be published for several weeks.

But Sunak will nevertheless announce a significant increase in spending and highlight a string of individual projects – including a boost to science funding.

Pouring taxpayer resources into leading-edge science, on the model of the US Advanced Research Projects Agency (Arpa) has been a longtime preoccupation of Johnson’s most senior adviser, Dominic Cummings.

Sunak will also say the Treasury is reviewing the “green book” rules, that help officials judge whether a potential investment represents value for taxpayers’ money.

With infrastructure spending generally slow to ramp up, the plans are unlikely to provide a short-term economic boost to help offset any slowdown created by the Covid-19 crisis – though Sunak could signal that the Treasury stands ready to take more action later.

He has also come under pressure to loosen the rules for controlling day-to-day spending that Javid had planned to introduce – giving the government more flexibility to increase spending on overstretched public services.

Among specific announcements will be a pledge to spend £500m this year – and £2.5bn over the next five years – on fixing potholes. The Treasury claimed the package would be sufficient to repair a total of 50m potholes.

Responding to the announcement, the Local Government Association’s transport spokesman, David Renard, said: “We are pleased the chancellor has listened to and acted on our calls for significantly more funding to fill and repair potholes.

“We look forward to seeing the details of how this money will be allocated between councils.”

McDonnell was dismissive, however, saying: “This rehash of Theresa May’s pothole fund is another policy announcement that shows the Tories trying to patch up problems they have created without getting a grip on the underlying state of infrastructure in this country.

“The Tories have created a £192bn infrastructure investment hole over the last decade, and throughout that time they have failed to adopt a strategy for investment in the long-term.”

He accused the government of pursuing “a gimmicky grab-bag of projects” instead of a coherent strategy.

A 3-Step Guide For Women Starting Their Investment Journey