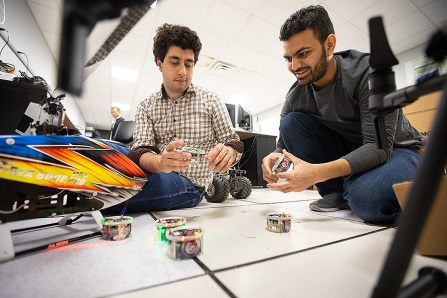 BUFFALO, N.Y. — Is it OK for the court system to use software for bail and sentencing decisions? Could new artificial intelligence software be used in a harmful way?

It’s these types of questions and more that University at Buffalo undergraduate computer science and engineering majors will grapple with under a new curriculum being developed by a multidisciplinary team of professors.

Rudra is the principal investigator of a $150,000 grant awarded to UB by the Responsible Computer Science Challenge, a competition funded by Omidyar Network (created by the founder of eBay), Mozilla, Schmidt Futures (created by a former Google executive), and Craig Newmark Philanthropies (created by Craigslist’s founder). It works to “integrate ethics and responsibility” into U.S. higher education computer science programs.

UB was one of 17 educational institutions nationwide to receive the award, organizers announced in April.

“In higher education, ethics have largely been an afterthought for computer science and engineering programs. That is changing. We’re going to ensure that our computer science majors have a strong ethical foundation when they leave UB and go on to become leaders in the workplace,” Rudra says.

While Rudra and the team of researchers are still fleshing out details of the curriculum, preliminary plans call for:

Throughout the curriculum, students will be encouraged to apply ethical principles to real-world case studies, Rudra says. Additionally, researchers will bring ethical views from other fields to bear on computer science and engineering student projects.